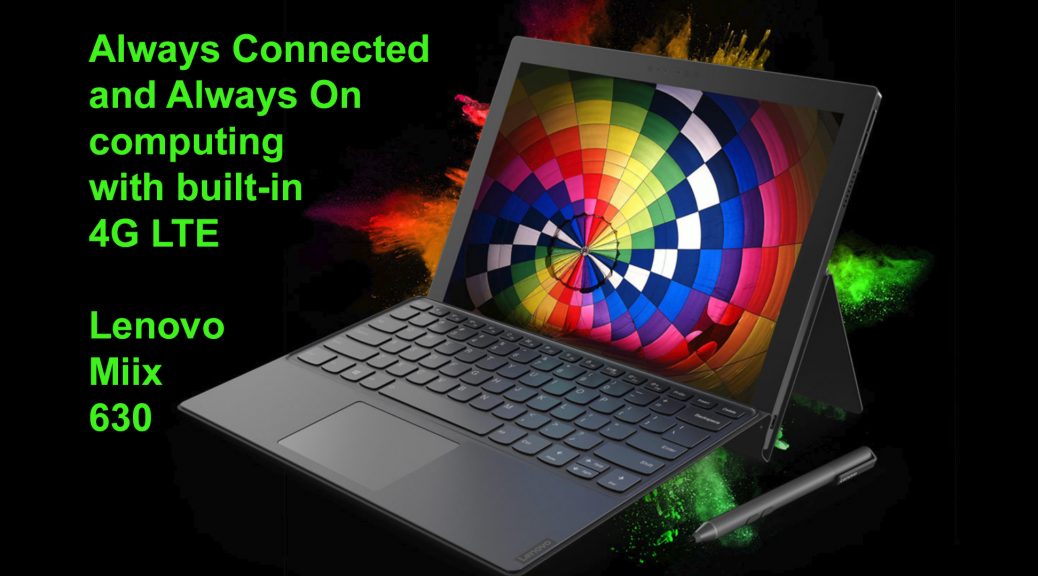 Select ASUS ZenBooks and VivoBooks will support Amazon Alexa, to be announced soon. SHOPPING FOR THE GROWING TREND OF ALWAYS CONNECTED WINDOWS 10 PC? READ THIS!

Consumers will likely be confused (I was too) with a new genre of Always Connected PC Windows 10 laptops announced at CES in Vegas at Intel’s Keynote by CEO Brian Krzanich.

The same Always Connected PCs on Windows 10 also launched last December at Mobile chip maker’s Qualcomm Snapdragon event in Hawaii, running on Snapdragon’s 835 Mobile Processor with all the laptop trimmings on three models: the HP 2-in-1 Envy x2, the ASUS NovaGo (TP370) latter followed by the Lenovo  Miix  630 averaging 20 hours of movie watching on a battery charge. They feature a unique smartphone-like Instantly On and one month standby. Typically, they run quieter with less heat and are lighter.

What they have in common is their ability to be always connected to wireless data like cellphones, with off course a data plan you will have pay for. The feature LTE built-in or an external smartphone-like Sim slot.

Qualcomm, Intel and OEMs are working on attractive plans with North America and world cellcos. One huge advantage of being connected on cellular networks is a much more secure connection compared to public WiFi. Data plans will be cheaper than traditional smartphone plans as there is no voice service…although that would be a good idea…at least SMS, no?

Since they all have a Spring availability, we can’t yet compare where the biggest bang for your buck falls when deciding between Intel and Snapdragon Windows 10 laptops. Most come with Windows 10 S, which only runs apps from the Windows store. However, most offer a time limited free upgrade to Windows 10 Pro which will run any Windows software.

Intel makes many variations of “Intel Core i3, i5 and i7” processors with variation of power and performance, especially their lower performing Intel “Y” series Mobility processors which will be challenged by the Qualcomm Snapdragon chips. More on this later folks.