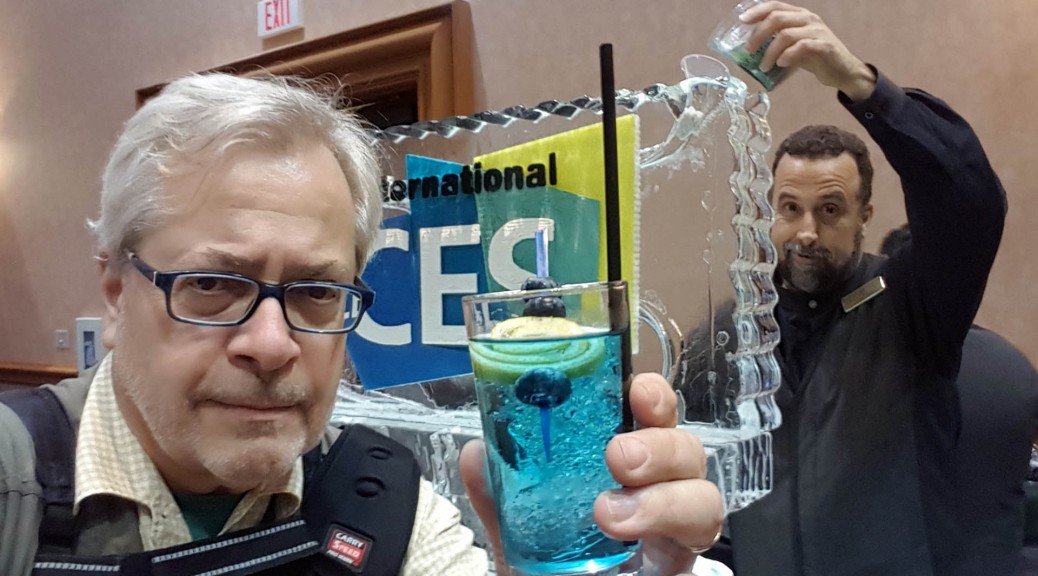 The 2016 Consumer Electronics Show in Las Vegas is the Mecca of inventiveness. More than 3,800 vendors ranging from tech giants Samsung, Sony and LG with booths the size of several ice arenas to one person 4 square meter single table booths swayed more than 170,000 attendees including some 50,000  outside the U.S.

Check out my coolest YouTube linked products at CES by clicking on the linked names.

Samsung Family Hub Fridge at CES commanded much attention. Priced at more than $6,000 CDN, it will be in Canada later this year pending negotiations with online grocery venues in Canada.  It features a 21.5 inch 1080p touch screen, three interior shelve cams, self digital food labelling with expiry dates, screen photo albums, online grocery ordering, weather and more. You can also see what’s in your fridge, live, with a phone app and switch the lower right compartment to a freezer when needed.

In contrast,  the less smart but stunning LG Signature fridge offers useful analog features like knocking on the dimmed main compartment door to make it transparent for viewing inside without opening the door.

Forgot a few stranded items after your wash has started?  Samsung Canada’s Sam Kim shows how the new Samsung Add Wash feature in the newly launched washer at CES 2016 in Las Vegas works. Correct me if I’m wrong, but in my 10 year old very analog washer, I simply lift the lid and drop the late wayward sock in, no? But we are talking a much better washer which BTW the Add Wash feature will safely not function during sanitation mode due to the higher temperatures.

I chuckled at LG’s Hombot robotic vacuum cleaner with a camera view from floor viewable from your phone. If you see a messier than usual spot on your floor, simply message the Hombot to work on it a bit harder.

Some early looks on upcoming technology was also shown at CES. The Sony LSPX-P1 wireless portable projector can project perfect rectangular images around the house from any angle.

The Sony PS-HX500 is a high fidelity turntable with direct drive and feather lite arm. It also connects to computers via USB cable with professional software to convert analog vinyl disks to digital music.

Samsung’s secret C-Lab took the covers off some of its research. It’s not what you would expect from the digital electronics giant. Samsung  has currently identified nine projects with “especially high potential” this year, including the three being showcased at CES. One of them, the WELT smart-belt, sends data to your phone app revealing much about how you move, how much it expands or contracts during your daily eating cycle and more.

Another C-Lab project showed NFC tags the size of a button, sewn on your jacket sleeve for transmitting information about yourself by tapping it to other NFC-capable phones.

The Airawear  unique Smart Comfort Jacket uses a sophisticated maze of air pressure points in its lining for a surprisingly effective and relaxing point pressure massage, posture reinforcement, body compression and biodata feed back on your phone app, which also controls the various features. It has a tight fit to be most effective.