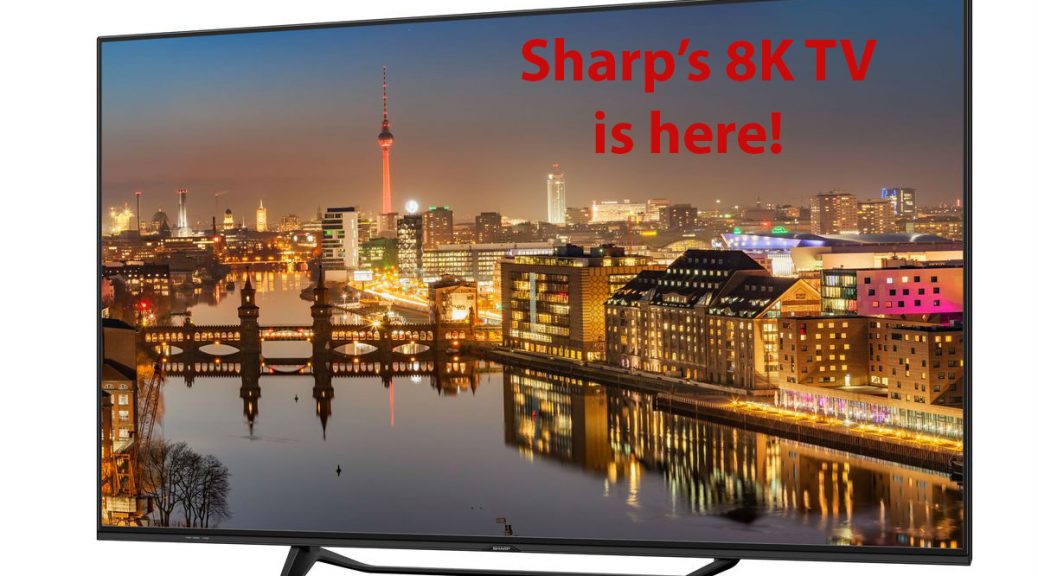 That’s $17,422 CDN folks. From screen and TV maker SHARP, after a seemingly long hiatus from store show floors the Japanese electronics company is blowing the dust off its unique IGZO fine screen technology for next Father of all TV’s.

The 8K screen was shown this weekend in Rome, hosted by Berlin based global Tech Show organizer IFA at their annual three-day Global Press Conference for more than 360 journalists flown in from around the world.

The SHARP 8K TV was the magnet of the event, gathering a media crowd for a closer look. In fact, much closer, because an 8K screen’s more than 33 million pixels are invisible to the human eye until you are less than a foot away from the screen.

But their current goal is to sell FullHD and 4K screens with a price range starting from under $1,000 and as more than several thousand for full featured LCD/LED and Plasma TV’s.

Are you ready for a screen that is four times sharper then 4K TV and 16 times sharper than Full HD? With a screen resolution of 7680×4320 pixels, the average consumer will be pressed to justify such TV’s. After all, North American TV broadcasters have finally settled in with Full HD news broadcasts and the likes of Amazon and Netflix are streaming a small selection of 4K content.

Lange said 8K TV can be enjoyed with self made content, but 8K TV content is scarce as are 8K cameras. You can certainly show still photos on the seemingly pixel-less 8K screen, but we are talking about 33 Megapixel images, something only the enthusiast and professional digital cameras offer. Forget about even the best cell phones.

Yes, the visual picture reality is jaw dropping but for now its for folks who simply don’t care how much 8K costs. They will buy it. I bet 8K will do well in China where ego and deep pockets is the driving factour for buying nothing but the best.

The IFA GPC 2018 in Rome is a precursor to IFA’s annual tech shindig, the IFA Berlin 2018, from August 31 to 5 September 2018. It’s one of the world’s leading trade shows for consumer electronics and home appliances. Alongside the event, IFA Global Markets will take place from 2 to 5 September at STATION Berlin, bringing together buyer sand OEMs / ODMs at Europe’s largest sourcing show for the electronics sectour.

A new topic at IFA 2018 will also be Shift AUTOMOTIVE, the new biannual convention on the future of mobility, which explores how new automotive technologies are changing the way we think, live, and drive. Shift AUTOMOTIVE is a joint venture of the Geneva International Motor Show, Palexpo, IFA, and Messe Berlin. The first Shift AUTOMOTIVE will take place on 4 and 5 September 2018, alongside IFA in Berlin, followed by the Shift AUTOMOTIVE in Geneva in March 2019.

Here are the IFA movers and shakers and their take on why technology will be front and centre this year.