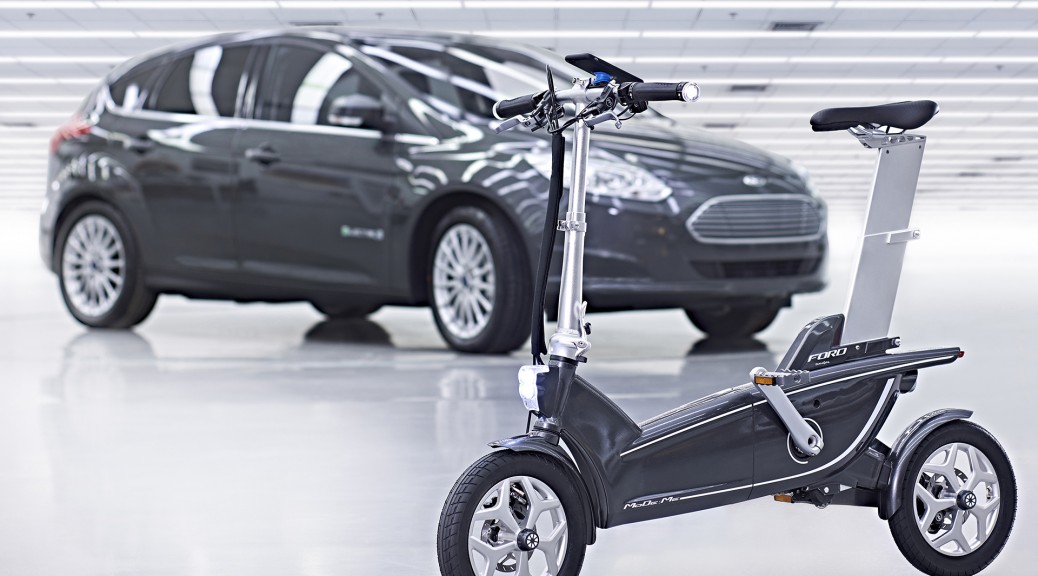 The next time you buy a Ford you may have a MoDe:Flex E-Bike option to take along in the trunk of your new car.

Welcome to Ford 2.0 where not everyone has to own a car. The car maker is cognisant about how its core product will fit in emerging lifestyles, especially in megacities – huge built-up urban areas where the  traditional car ownership model is changing.

At the recent Further with Ford 2015 event in San Francisco, Ford didn’t talk much about new car models. Instead, it was about mobility in growing congested environments, where public transportation, walking, biking and off course the occasional need for a car (hopefully a Ford) all come into play.

Ford CEO and President Mark Fields set the tone on Ford’s smart mobility goals with innovative ideas.“We view ourselves as an automotive company and a mobility company” said Fields. He shared Ford’s flexible use and ownership of cars and multi-modal urban mobility solutions.

“What is often overlooked in marketing is the relentless focus on textbook execution. We spent more money than anything else on the packaging…Beats was a gift that you gave to yourself or you gave to someone else.”

Alexis Ohanian, co-founder of Reddit the online platform of more than 10,000 communities expressing themselves and setting the tone and opinion on online conversations everywhere.

“This Y generation (those born just before 2000) has grown up to be skeptical of today’s institutions of power. The reality of the online world we live in today is that a cute cat photo captured by a 12 year old can capture more attention than a big news story.”

-“My early mistakes intent on living a life of anarchy, including getting caught shoplifting (and let go) made me realize that living free is not living free.”

Her destiny in online fashion retailing started out of boredom during a short stint as a security guard at an art school. She picked up a copy of Starting an eBay Business for Dummies.  That lead to her starting  an eBay store re-selling vintage clothing. Today Nasty Gal has over 500,000 clients from 60 countries. “The Internet has created a new type of resourcefulness,” said Amoruso. Indeed it has.

What an eye opener! The SaveLIFE Foundation, is a nonprofit, nongovernmental organization committed to improving road safety in India.  It provides emergency response, in most cases car accidents, with trained volunteers – connected through a mobile app – who come to the aid of injured people before formal care is available.

“By the end of today 380 people will die in road crashes in India,” said Piyush whose SaveLIFE Foundation has trained thousands of police and nominated ordinary citizens to be first responders in accidents, including getting the injured to the hospital.

“One half million lives will be saved in the next decade,” said Piyush whose prior job was partner and managing director at a U.S.-based private equity fund. Talk about an amazing job change!

Bell Genevieve Intel Fellow, Vice President Corporate Strategy Intel, managed to entertain and inform commenting on subjects spanning culture and technology. She spoke about automation, an ongoing process in human evolution, but fraught with a sense of doom.

“We have a long standing fascination with unshaped matter and perils and warnings about bringing things to life. Why is it that if we design things that come to life they will hunt us down and kill us?

Here’s Ford technology I saw that is working today:

Check out this interesting site on Ford trends 2015